NO IBRA - NO PARTY, BUT A GOOD TEST FOR SWEDEN 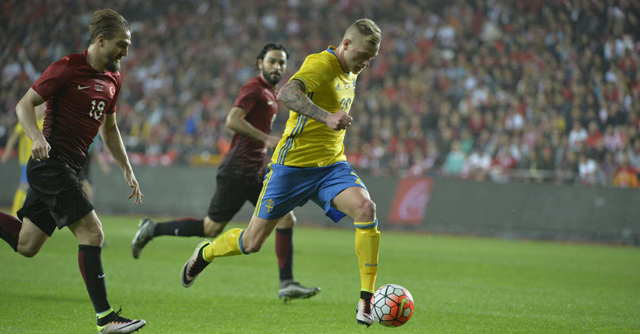 Sweden lost 2-1 against Turkey in tonight's friendly in Antalya. Cenk Tosun scored both Turkish goal in a game where Sweden delivered a decent performance without Zlatan.

Turkey were the better team in the first half and had the lead at halftime after a nice header from Cenk Tosun in the 32nd minute.

Erik Hamrén put Marcus Berg (Panathinaikos) and John Guidetti (Celta Vigo) upfront but it wasn't neither of them who equalized for Sweden in the second half, it was center back Andreas Granqvist on a set piece.

With less than ten minutes to go, Cenk Tosun scored the gamewinner to 2-1.

Notable in the Sweden team was that talents Ludwig Augustinsson (FC Copenhagen) and Victor Nilsson Lindelöf (Benfica) both played 90 minutes in their "real" debuts for the Swedish national team.

Zlatan was rested due to his hectic schedule with PSG.

He will play against Czech Republic on Tuesday in Stockholm.