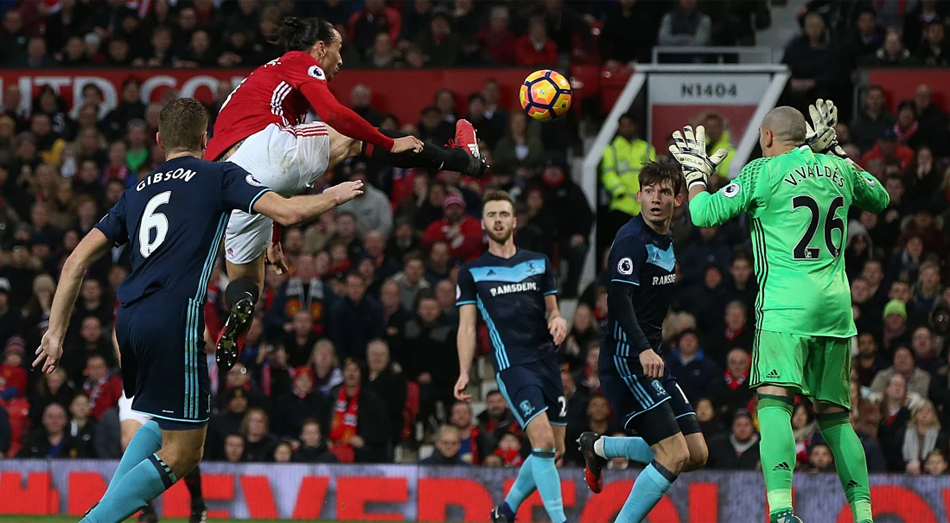 What seemed like three easy points against Middlesbrough all of a sudden turned into a potential loss.

But then Man Utd woke up, stormed forward and scored twice in the last five minutes and won their fifth straight Premier League-win.

- We won, and that’s what’s most important. We’re getting better and better, Zlatan said after the game.

United took charge of the game from the first minute and could have/should have scored in the first half. Mkhitaryan had a few chances, Martial, who was amazing in the first half, hit the post and in the 38th minute Zlatan scored a great backheel-goal. BUT the referee wrongly decided Zlatan's high kick interfered goalkeeper Valdez and disallowed it. 0-0 at halftime.

Man U kept going for the goal in the beginning of the second and Middlesbrough were on their knees. Zlatan got a great chance, but Valdez saved. Martial shot from distance but with the same result. Instead Boro went up and scored in the 67th minute. Negredo headed the ball down to Leadbitter, who shot the ball past De Gea. 0-1 to Middlesbrough, and alot of pressure on United.

The minutes passed and the frustration kept building up for United-fans all over the world. Mourinho took Smalling off for Rashford and went gung-go, and it paid off. In two incredible minutes United scored twice and won the game! First Zlatan assisted Martial to 1-1 in the 85th minute and two minutes later Pogba made it 2-1 with his head, on a great cross from Mata. Amazing comeback, Man Utd won 2-1 and took their fifth straight Premier League-win.

Zlatan started the game as usual and played quite alright in the first half.

He is in great form at the moment, which shows in his movement and ability to hold the ball up.

In the 38th minute he should have gotten his 13th Premier League-goal of the season but referee Lee Mason saw something no one else saw. Zlatan jumped up and backheeled Martial's cross into the back of the net, and then clearly lowered his high foot before the goalie Valdez came out, but Mason figured Zlatan fouled him and disallowed the goal. Bad decision.

Zlatan somewhat got his "revenge" in the 85th minute. Pogba found him with a long ball, Zlatan nodded it down to Martial who scored the equalizer. Zlatan's third assist in the last two games.

Perhaps not the best performance from Zlatan this season, which says more about his other performances than this one. Twelve goals and three assists in his last eleven games.

The match against Middlesbrough ended 2-1 for your United, after a forceful turn of events in the final minutes. What do you think of the win?

ZLATAN: "We won, and that’s what’s most important."

In the first half, you scored a beatiful goal that was disallowed. Your thoughts about the situation?

2016 ends in yet another win, and your United enters 2017 with five straight wins and ten matches without losing. What potential do you see in the United squad as it stands now?

ZLATAN: "We’re getting better and better."

With just a few hours left in the year, how will you celebrate tonight to welcome 2017? 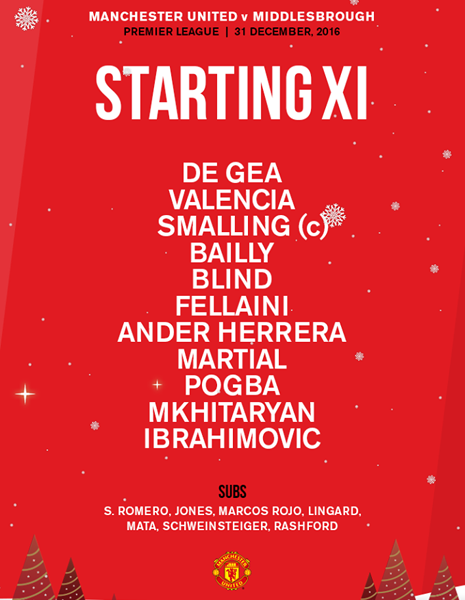