EASILY THROUGH TO THE NEXT ROUND 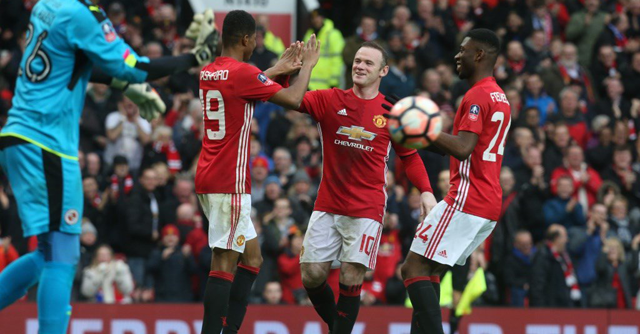 Mourinho rotated the squad quite substantially, resting Zlatan, Pogba, Herrera and De Gea. Rooney started behind Rashford up front and in the seventh minute Rooney scored his 249th goal for Manchester United, tying the all time goalscoring record with Bobby Charlton. 1-0 to Man Utd.

Many thought Reading, who are currently third in the Championship, would put on a tough challenge. But in the first fifteen minutes there was only one team on the pitch. United came in attack after attack and in the 15th minute Anthony Martial scored a nice goal. Wayne Rooney set him up and he placed the ball nicely in the corner, 2-0 to Man Utd. Rashford could have scored a third goal but it was 2-0 at halftime.

Marcus Rashford missed quite a few opportunites both in the first half in the second but he kept being dangerous and in the end he scored not only once, but twice. In the 75th minute Carrick found him with an excellent through ball and he placed the ball decisively into the back of the net, 3-0. And then four minutes later, Reading's goalie Al-Habsi made a complete mess of a back pass and Rashford tapped in 4-0.

Zlatan didn't have to play today and Manchester United easily advanced to the 4th round in the FA Cup.